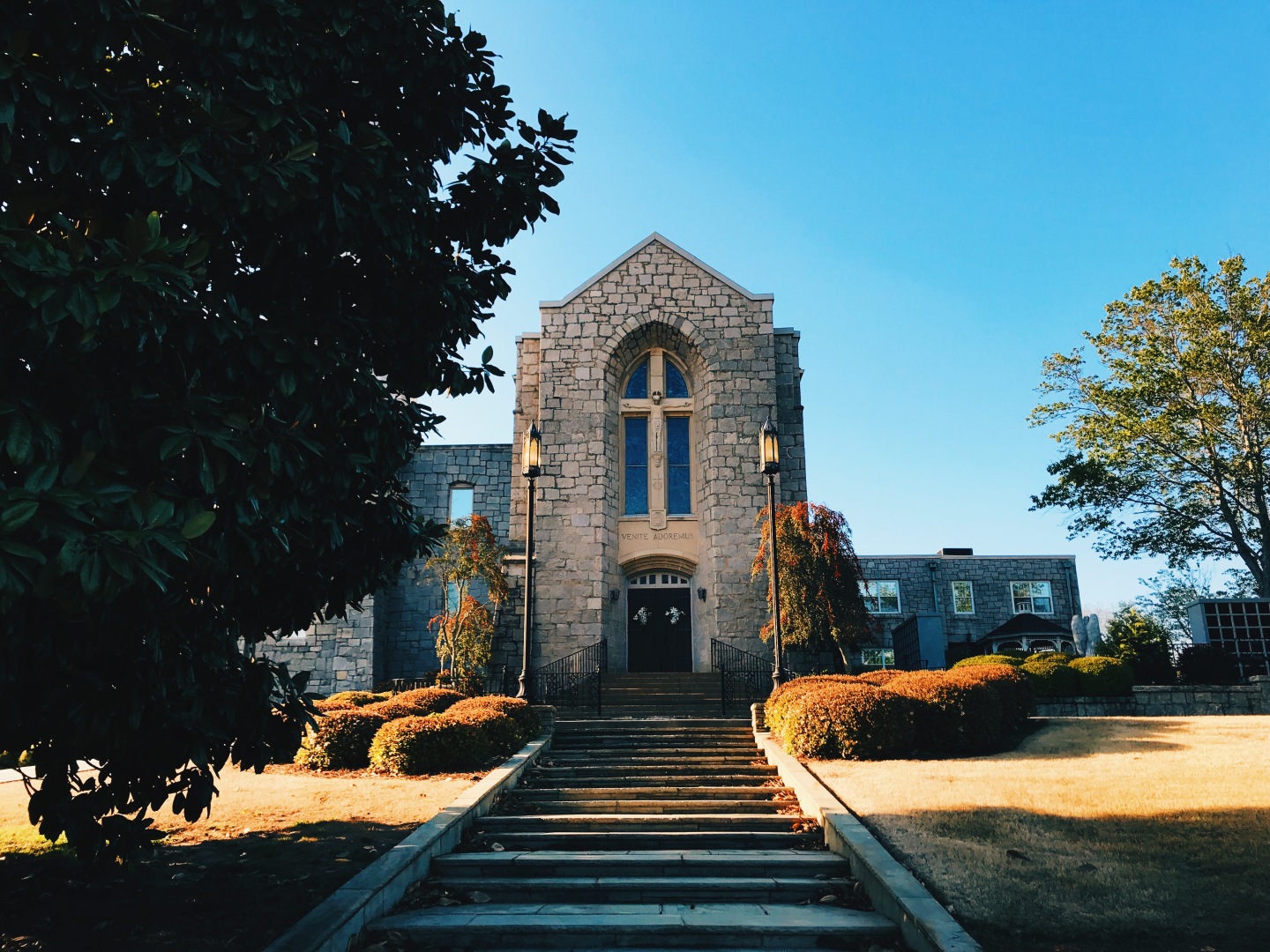 A Brief History of our home, St. Mary's Church 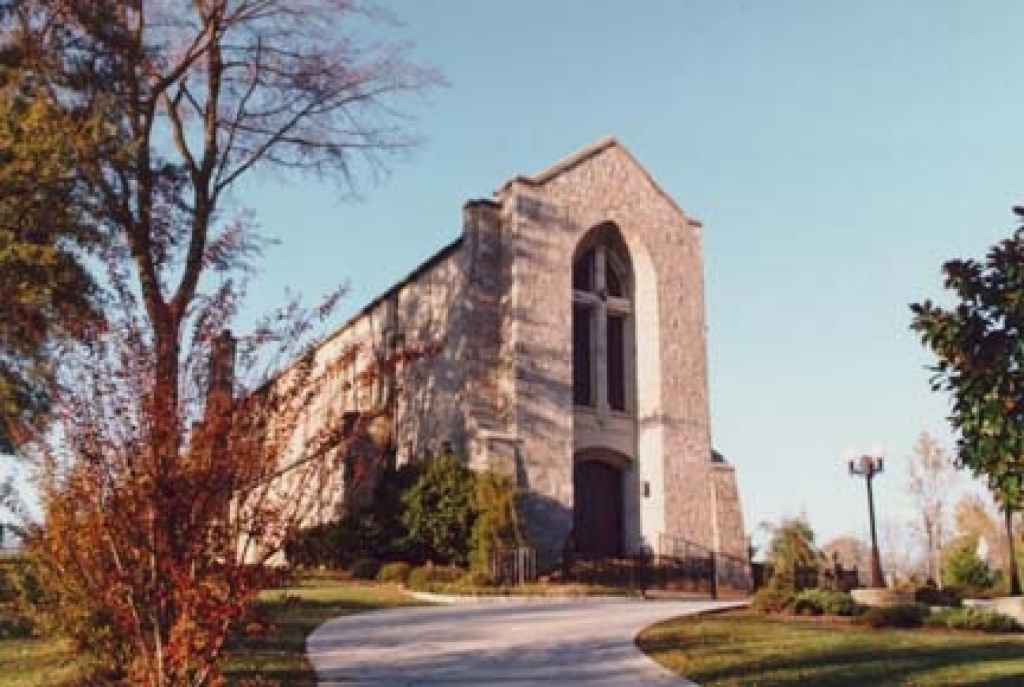 The first Catholic church in Rome was built in 1874 on East First St. (then Court St.) next to St. Peter's. It was a simple wooden structure with a small steeple which served for 45 years. The present church was built in 1930 at a cost of $30,000. Designed by a Benedictine monk and architect from Belmont Abbey in North Carolina, it is inspired by Gothic forms and monastic simplicity. The only ornamentation on the exterior is the large crucifix above the door, the coat of arms of the bishop, and the inscription Venite Adoremus, "O come let us adore." The simple interior of the church has undergone a number of changes. For many years, a large sixteenth-century oil painting of the Madonna and child hung above the altar. It was given to the church by Princess J. Eugenia Ruspoli of Rome, Italy, a sister of Miss Martha Berry. This painting and two smaller oils from the Princess are now displayed in the Parish Center.

In 1998, transepts were added to the church to double the seating capacity. New stained glass was commissioned for the upper or clerestory windows. A new organ was installed. The high altar, pulpit, and the altar where Mass is celebrated were added. A new Parish Center was constructed which contains administrative and religious education offices, conference center, nursery, library, brides room, and the Parish Hall (Hackett Hall). The steeple was erected to contribute to the beauty of the Rome skyline.

The high altar was designed and constructed in Italy in 1930 for the student chapel of Campion Jesuit High School in Prairie du Chien, Wisconsin. It is made of Carrera and Blanco Chiaro marble with Venetian mosaic and onyx accents. The carving of the Last Supper is a particularly fine example of the period. In its original installation, the altar contained statues in the three large niches and angels holding candelabra on the side extensions. However, the chapel where it was originally installed was closed as a house of worship, and the altar was literally saved from the wrecking ball when it was purchased by St. Mary's in 1995. It was carefully dismantled, cataloged, and stored. In 1998, it was brought to Rome and installed by artisans specializing in marble reconstruction. The replacement cost of the altar is in excess of $1 million, though it would be nearly impossible to duplicate the work.

The pulpit and the altar for the celebration of Mass were designed and constructed in Rome from pieces of the original communion rail which were obtained with the high altar. Edmond and Robert Cescutti were in charge of the project. The details of these pieces complement the high altar and although new, they blend seamlessly with it. The stained glass panels in the upper windows were created by the firm of Gianninni and Hilgart in Chicago. Because of the shape of the openings, single images rather than Scripture stories were generally chosen for the windows. There are several Marian windows in honor of the patroness of the parish as well as St. Joseph, St. Peter, St. Paul, St. Francis of Assisi, the Holy Family, Christ and the Children, Christ the King, and the Good Shepherd.

The steeple was designed in 1930 and was to be constructed with the original church. However, the economics of the day prevented the steeple from being realized at that time. As part of the new construction in 1998, the parish was able to complete the vision of the parishioners of the 30's, and the steeple was included in the expansion. It is identical to the original design although lighter, more modem materials were used in construction. Please enjoy our church. May you find it a welcoming place to worship and pray.

Relics for the Altar

When the church and new altar were dedicated on December 19, 1998, the relic of St. Helen, Virgin and Martyr, was removed from the old St. Mary's altar and placed beneath the new altar as part of the rite of dedication. This ceremony comes from an ancient practice of the Church. When Christians secretly gathered for the Eucharist during the Roman persecutions of the first three centuries, it was usually in the Catacombs which were the underground burial places of Rome. There a table for Mass would be set up over the buried remains of Christian martyrs. When the Emperor Constantine ended the persecutions in the 4th ' century, Christians kept the practice of celebrating the Eucharist on altars built over relics of the martyrs which were brought from the Catacombs. Thus St. Ambrose could write in 385 AD that "Christ who suffered for all was upon the altar in his sacramental presence while those who were redeemed by his sufferings were under the altar." In our day, the placing of the relics under the altar is optional, but it is a tradition we reverently maintain here at St. Mary's. Thanks to DANIEL'S Funeral Home and the good efforts of Neil Sanders, we have been given a beautiful white marble container to use for our relics. It matches the altar and provides a sealed repository for the relics which now permanently rest below the "mensa" or the table of the altar. In addition to the original relic of St. Helen, we have placed relics of Pope St. Pius X, co-patron of the Archdiocese of Atlanta, St. Theresa of the Child Jesus also known as "the Little Flower," St. John Neumann, the first American bishop to be canonized, and the relics of an unknown saint. Thus in every Mass, we unite ourselves to the sacrifice of Christ, to the universal church on earth, and to the Communion of Saints in heaven, of which the relics are a beautiful reminder.

For more than 250 years, Catholic families have celebrated their faith in God and their friendship with each other in a unique place in northwest Georgia called St. Mary's. The seeds of Catholicism, however, were sown much earlier, when Fernando De Soto  journeyed through the territory in 1540 and encamped at the three rivers. In his company were missionary priests who celebrated Mass for the expedition. From the 1740's until after the Civil War, a small group of Catholics gathered regularly whenever a missionary priest traveled through the area. Mass would be said in the home of Colonel D. S. Printup, a Protestant gentleman who as a Civil War prisoner had been cared for by the Sisters of Mercy. In gratitude for the kindness of the sisters, he made his home available for Mass and was a lifelong friend of St. Mary's. By the 1870's, there were about 30 Catholics in Rome. Small in number but devoted to the faith, they undertook the difficult task of building a church. The site of the first church was Court Street, now East First Street. The property was donated by the family of a young non-Catholic who, when stricken with typhoid fever, was lovingly cared for by Mary Kane, the ancestor of many present parishioners. In gratitude to her, his family donated the land for the first Catholic church in northwest Georgia. In 1874, Bishop Gross dedicated the simple wooden structure that would serve for almost 60 years.

By the late 1920's, the Catholic community had grown steadily, served by visiting priests from Atlanta and by devoted lay people who lead prayers and devotions, taught catechism, and administered to the needs of the church. Hannah Fahy, who later became Sister Peter Claver, persuaded Bishop Keyes to send a resident pastor to Rome. And in 1930, Fr. Joseph Cassidy, a legend in the Catholic history of Georgia, was sent to St. Mary's. Fr. Cassidy quickly addressed the needs of the 50 families which had outgrown the t874 church. The site for the new church on Broad Street was purchased for $ 1 0,000. The old The First St. Mary's School - Opened in 1945 church was sold to the Jewish community where the present synagogue is now located, and the pews were sold to St Peter's Episcopal Church for their chapel. Plans were drawn by a Benedictine monk and architect from Belmont Abbey in North Carolina for an impressive granite structure which would become our present St. Mary's. Construction of the church rectory commenced at a cost of $30,000, but the Depression halted construction of the bell tower which was part of the original plan. On March 15, 1931, a proud but indebted parish welcomed Bishop Keyes for the dedication ceremonies. By 1936, the year Fr. Grady was assigned to Rome, the parish had paid off the debt on the new church, a remarkable accomplishment.

Equally remarkable for a small parish, was the founding of St. Mary's School. Fr. McCarthy, who substituted for Fr. Grady when he was on military tours, established the school in an elegant ante-bellum home overlooking the Oostanaula River. Served by the Dominican Sisters of Adrian, Michigan, the school opened in 1945 with 51 students. A beloved priest named Fr. Pat Connell served as pastor in the 1950's. During this time, the parish's grew to almost 200 families with the opening of the General Electric Company. By 1959, when Fr. John McDonough was assigned as pastor, he found that the old school could no longer serve the needs of the parish. Fr. McDonough undertook the building of the present school at a cost of over $300,000. It was another immense undertaking for the parish, but an insightful and successful one as well. The new school opened in 1961 in a modern facility with nearly 200 students.

During the 1960's, several pastors and assistants fol- lowed in rapid succession including Fr. Dale Freeman, Fr. Eusebius Beltran, and his brother, Fr. Joseph Beltran. Ft. Ed O'Connor arrived in 1969 for a memorable period of four years. During this period the Daughters of Charity took over the staffing of the school and remained here for 21 years. Fr. Anthony Curran and Fr. Michael Hogan served during the mid 1970's and Fr. Pat Mulhern arrived in 1977. During his administration, a new wing was added to school consisting of a gymnasium, library, classrooms and a music room. \When Fr. Mulhern was transferred, there were 400 families at St. Mary's.

Fr. Ed Danneker had a long pastorate during which the school expanded once again. By 1990, when Fr. James Miceli was assigned, there were 440 families registered in the parish. In 2009, Fr. Miceli submitted for retirement for health reasons, and Archbishop Wilton Gregory assigned Fr. Patrick Kingery to assume the pastorate of St. Mary's Church. During this time, the parish completed a debt elimination campaign to retire the debt from the renovations in the late 1990's, as well as to perform repairs on parking lots and installation of a new HVAC for the church.  Fr. Kingery served as pastor from 2009 to the end of 2015 when he applied for a sabbatical. In July 2016, Fr. Rafael Carballo was assigned as Pastor to our parish, now comprised of over 1800 families; then, in July 2017, Fr. Valery Akoh was assigned as Parochial Vicar, marking the first time in 30 years we've had 2 priests in residence at St. Mary's.

From a handful of Catholics to 1700 families from a simple wooden church on East First Street to our present facilities -- from 51 students to over 200 the legacy of our faith has been passed from generation to generation. Today, the challenge of continuing the legacy rests with our generation, a challenge which must be met to nourish the growth of our children and our family of faith.